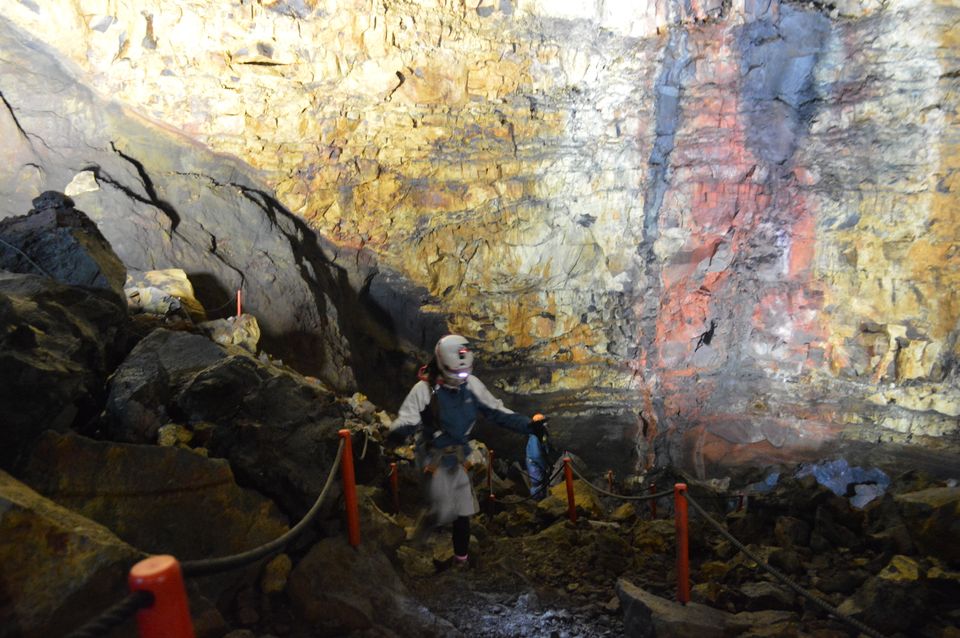 Two kids in the city do not grow up seeing volcanoes, or even mountains… So when we travel, we look for new things to see and adventure! In Reykjavik, Iceland, you can experience being INSIDE A VOLCANO! How cool is this!! The excursion was 42,000 kr (~$365) and 5-6 hours. Book it directly on their site.

The mini tour bus picked us up from the hotel and to the booking center. In 50 minutes, we reached the other camp site to gear up. They provide these long yellow rain jackets which were a must!!

The walk to the base camp is about 45 minutes, so dress warmly. I wish I brought my snowboarding gear that is waterproof and insulated! I wished I had my goggles because that can be helpful against hail (or even to trek closer to the waterfalls mentioned below for beautiful photos).

Once we arrived at the base camp, we were greeted by warm tea and coffee. After a brief safety message, the Group 1 geared up with helmets. The tour experience is only for 6 people at a time since the window washing transporter can only fit 6-7 people max. While sipping tea and patiently waiting for our turn, we mounted the GoPro to the helmet. Yay for the 2 helmets with the mount!!

Once it was our turn, it started to rain harder. Despite that, we were EXCITED! We took off our helpful yellow rain coats and braced the cold. We went down the window washing transporter, which had wheels on one side to buffer against the uneven volcano opening (it actually got warmer as we were further from the opening). There was even a portion of the volcano wall that had metal reinforcement to ease the machine down. Once we were safely stopped at the volcano bottom, we had about 20-30 minutes to explore the space.

A little history behind the Þríhnúkagígur Thrihnukagigur Volcano from our tour guide: it has been dormant for thousands of years... The magma burst out of the volcano in two spots. One opening was closed off. There are speculations about the crater that formed which allows people to be able to walk in the volcano. There appeared to be a small gas chamber that helped expel some of the magma gas out. Natural wonders are so cool 😮 .

Going back up the volcano and back to the base camp was super cold (strong hail) so being greeted to lamb soup was perfect.

Soon after, we began our 45 minute journey back in the rain. This time I took Kevin's yellow coat which was longer so no water got into my shoe! During this walk, we realized our hiking shoes were actually not waterproof (from Amazon: Women’s Wolverine Women's Blackledge LX Waterproof Mid Ankle Hiker* and Men’s Hi-Tec Men's Bandera Mid Waterproof Hiking Boot*). Hopefully that's just because rain was pouring into the shoes vs the shoe not being able to withstand water puddles... Either way, these shoes were great for the rest of our trip!

After this trip, I purchased Anhu/Teva boots* and I have been wearing them since!

Check out more photos from Inside the Volcano on their gallery or their IG @insidethevolcano.

* indicates affiliate link and I appreciate your support <3